Persistence is More Important than Talent 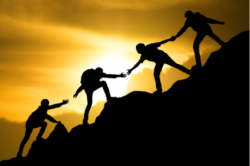 In this article, I explore persistence and talent – why both are necessary and why persistence more than talent has been responsible for human advancement.

Consider the below words of President Calvin Coolidge. They called him “Silent Cal” because he was a quiet man. As is often the case with quiet men and women, they usually give us wisdom when they do speak.

“Nothing in this world can take the place of persistence. Talent will not; nothing is more common than unsuccessful men with talent. Genius will not; unrewarded genius is almost a proverb. Education will not; the world is full of educated derelicts. Persistence and determination alone are omnipotent. The slogan Press On! has solved and always will solve the problems of the human race.”

Below I give you my take on persistence: success is not very far from failure; success requires focus; success depends on how high you bounce.

Success is Just the Other Side of Failure

There are many situations throughout history where most advice was to give up. No one in history has achieved any success by giving up. Name one person of note in history that achieved what he and she achieved by giving up. It just doesn’t happen.

The following is from Famous Scientists – The Art of Genius:

Madame Marie Curie overcame two significant obstacles with her persistence – her father had too little money to support her ambition to go to university higher education not available for girls in Poland.

To overcome the obstacles she faced, Marie worked as a tutor and children’s governess to support her sister, Bronya, financially. This allowed Bronya to go to France and study medicine in Paris. Marie followed Bronya to Paris. By working during the day, she attended the Sorbonne, Paris’s most prestigious university, at night to study chemistry, mathematics, and physics. She earned a bachelor’s degree in Physics in 1896 and a master’s degree in Chemistry in 1897.

In case you are wondering, Madame Curie discovered polonium and radium, championed the use of radiation in medicine, and fundamentally changed our understanding of radioactivity.

There is no mistaking Madame Curie had a talent for science, but there is also no mistaking her talent would have only gotten her so far. It was because of her persistence in not giving up after failure stared at her in her face that she was able to think of solutions to her challenges.

Success was just the other side of failure for Madame Curie, and it will be with you also in your speaking. Her focus and determination led to her incredible discoveries.

As a speaker, your ability to not stop your progression in the face of failure will determine your speaking success.

Madame Curie no doubt achieved the extraordinary through her not giving up in the face of adversity.

A great American industrialist’s focus led to a great invention we still use today.

There is no sadder a situation than a person who keeps changing his or her focus in life. There is one man who didn’t waver in his focus. Because of his unwavering focus, he created a new invention I am sure you will recognize.

The following is from Desire: The Real Secret of Henry Ford’s Success:

A few years back, Ford decided to produce his famous V-8 engine. He chose to build an engine with the entire eight cylinders cast in one block and instructed his engineers to create a design for the engine.

The engineers created the design on paper, but they agreed, to a man, that it was simply impossible to cast an eight-cylinder gas engine block in one piece.

“Go ahead,” Ford commanded, “and stay on the job until you succeed no matter how much time is required.”

The engineers went ahead. There was nothing else for them to do if they remained on the Ford staff.

At the end of the year, Ford checked with his engineers, and again they informed him they had found no way to carry out his orders.

“Go right ahead,” said Ford, “I want it, and I’ll have it.” They went ahead, and then as if by a stroke of magic, the engineers discovered the secret that made the V-8 possible.

Henry Ford’s focus and determination won the day and are responsible for millions of people driving cars with V-8 engines today. It will work for you also.

But how should you best respond to failure on your way to success?

Success is Dependent on How High You Bounce

There is an old saying, “The important thing is not how far you fall, but how high you bounce.

Through many trials in my life, I have learned activity is the ultimate cure for failure. Activity in the direction of your desire determines how high you bounce.

You may sometimes feel things did not go very well in your presentation. Have you ever heard the term “hot wash?” We used this term in the military following a presentation, where we would immediately sit down and relive the presentation noting the good points and points for improvement. This “hot wash” is an example of the “activity” I talk about above.

As Paul Harvey used to say, the rest of the story is after the departing program manager had done a “hot wash” on his tenure in the program, his reputation soared. The company gave him another chance as the program manager on the most significant contract the company had ever won.

That departing manager knew how high he bounced after his fall would determine his future success. It did in his case as it will after you have had some failures.

It sounds counterintuitive, but success is not possible without failure

I have given you my take on persistence: success is not very far from failure, success requires focus, success depends on how high you bounce.

Your success as a speaker depends on seeking success after failure, remaining focused, and throwing yourself into focused activity after encountering failure.

As far as your current and future successes are concerned, your persistence is more important than your talent.

Never, never give up!

Your persistence determines your success!

“Our greatest glory is not in never failing, but in rising every time we fail.” – Confucius

Frank DiBartolomeo is a retired U.S. Air Force Lieutenant Colonel and award-winning speaker, presentation and interview skills coach, and Professional Member of the National Speakers Association. He was awarded Toastmasters International’s highest individual award, Distinguished Toastmaster, in 2002 because of his outstanding work in public speaking and leadership.

What is Your “Because?”

Prepare and Reap Your Speaking Opportunities

Do You Manipulate or Persuade When You Speak?

Are Great Speakers Born or Made?