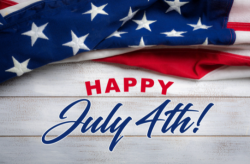 “There is nothing wrong with America that cannot be cured with what is right in America.”

For the readers of my articles and blogs, you know I emphasize that to be a successful speaker, you must influence your audience. Without influence, you are just an entertainer. Hopefully, you are trying to convince your audience of your way of thinking.

I think it is befitting on America’s birthday, the 4th of July, I talk about the influence of three men who were instrumental in influencing the founding fathers to pursue dissolving the ties between America and Great Britain.

These men are Thomas Paine, Samuel Adams, and Benjamin Franklin.

All three had a significant influence on the Declaration of Independence. Here are some exerpts from Wikipedia on these extraordinary patriots:

He authored Common Sense (1776) and The American Crisis (1776–1783), the two most influential pamphlets at the start of the American Revolution. He helped inspire the patriots in 1776 to declare independence from Great Britain.

Thomas Paine solidified popular opinion that America should break away from Great Britain. He was one of the most brilliant writers in America and is a sparkling example of how communication, both written and spoken, can change the destinies of nations. You should aspire and make plans to be as influential as Thomas Paine.

Someone you may recognize if you raise a beer in toast this 4th of July is Samuel Adams.

Samuel Adams (1722 – 1803) was an American statesman, political philosopher, and founding father of the United States. He was also a second cousin to his fellow Founding Father, President John Adams, and a delegate to the First and Second Continental Congresses.

He was a politician in colonial Massachusetts, a leader of the movement that became the American Revolution, and one of the architects of the principles of American republicanism that shaped the political culture of the United States.

Finally, he was the founder of the Sons of Liberty, a loosely organized secret society in the Thirteen American Colonies to advance the European colonists’ rights and fight taxation by the British government.

Samuel Adams was a man of influence. You should practice the same amount of determination Samuel Adams put into the glorious cause of independence.

Benjamin Franklin (1706 – 1790) was one of the Founding Fathers of the United States. A polymath (an individual whose knowledge spans a substantial number of subjects, known to draw on complex bodies of knowledge to solve specific problems), he was a leading writer, printer, political philosopher, politician, Freemason, postmaster, scientist, inventor, humorist, civic activist, statesman, and diplomat.

As a scientist, he was a major figure in the American Enlightenment and the history of physics for his discoveries and theories regarding electricity.

He founded many civic organizations, including the Library Company, Philadelphia’s first fire department, and the University of Pennsylvania.

He was a delegate to the Second Continental Congress, and, most importantly, he was a member of the Committee of five who wrote the Declaration of Independence.

Additionally, he obtained French Aid for America during the Revolutionary War, when the war looked like it would be lost.

Benjamin Franklin was indeed a self-made man who helped light the cause of liberty and create the United States of America. He was a man of influence.

You should aspire to be a speaker of influence.

I have shown how three patriotic Americans (Thomas Paine, Samuel Adams, Benjamin Franklin) used their influence to change their world. They created the United States of America.

The freedoms we enjoy in America were born under these men’s influence.

Be a speaker of influence. Change people’s minds to better our world. You have it within your power to do so!

Two-hundred forty-five years ago, the founding fathers influenced others for the betterment of their world. So why not do this too!

There has never been a country like the USA that has fought and still fights for freedom. As an American citizen, this is your legacy. Protect it!

On the 4th of July, whether you are flipping hamburgers on the grill or attending a parade, or just having a quiet day home with your loved ones, remember the men and women who have risked their treasure and their lives so we can enjoy our freedoms in America!


“Freedom is never more than one generation away from extinction. We didn’t pass it to our children in the bloodstream. It must be fought for, protected, and handed on for them to do the same, or one day we will spend our sunset years telling our children and our children’s children what it was once like in the United States where men were free.”


Frank DiBartolomeo is a retired U.S. Air Force Lieutenant Colonel and award-winning speaker, presentation and interview skills coach, and Professional Member of the National Speakers Association. He was awarded Toastmasters International’s highest individual award, Distinguished Toastmaster, in 2002 because of his outstanding work in public speaking and leadership.

Frank formed DiBartolomeo Consulting International (DCI), LLC (www.frankdibartolomeo.com) in 2007. The mission of DCI is to help technical professionals to inspire, motivate, and influence their colleagues and other technical professionals through improving their presentation skills, communication, and personal presence. Frank can be reached at frank@frankdibartolomeo.com and (703) 509-4424. 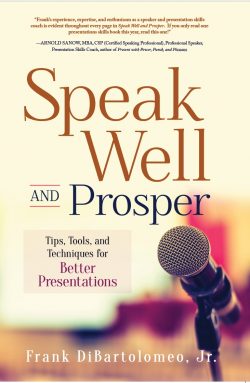 Available now at Amazon.com and BarnesandNoble.com

Give Thanks for Being a Speaker

Use Referrals to Propel Your Speaking Business!

Is Your Audience’s Mood Aligned With Your Presentation?

Flexibility is the Key to Your Speaking Power